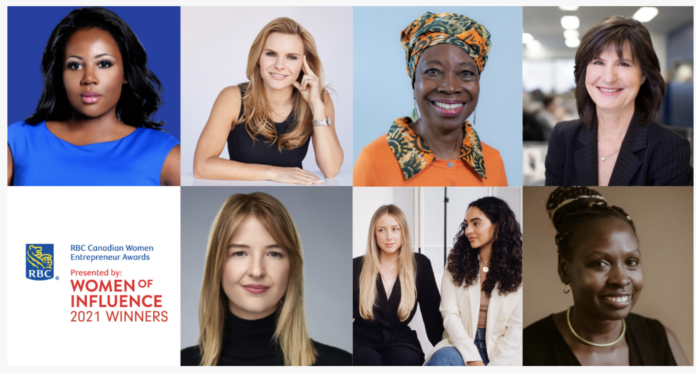 TORONTO, NOVEMBER 17th, 2021 – The 29th annual RBC Canadian Women Entrepreneur Awards, presented by Women of Influence, announces seven winners of the 2021 awards. These award winners join the five recipients of the up-and-coming entrepreneur Ones to Watch award category, which was announced in September of this year.

The winners in each of the award categories are leaders who have not only risen to the challenge of the past two and a half years but who have continued to be the backbone of the Canadian economy in a time when it was needed most. This year’s cohort of recipients spans sectors that include media, venture capital management, apparel, construction, medical services, cybersecurity and beyond.

This year, in recognition of the incredible growth of the overall program, the Social Change category has been expanded. This award has now grown to include two categories: Social Change: Regional Impact, which recognizes a leader of a registered charity, social enterprise or not-for-profit that is dedicated to their unique brand of social change at a local or regional level; and Social Change: National Impact, which recognizes those whose organization has national or global impact.

“RBC is honoured to celebrate the achievements of Canadian women entrepreneurs who have been instrumental in driving business success in Canada,” says Greg Grice, Executive Vice President, Business Financial Services, RBC. Our ongoing commitment to the RBC Canadian Women Entrepreneur Awards is one of the many ways in which we proudly continue to support them by recognizing and promoting their inspiring stories. We’re proud to put a spotlight on this year’s winners who are exceptional leaders, innovators and rising stars. Their leadership, passion and entrepreneurial spirit serve as an inspiration for the next generation of Canadian entrepreneurs to pursue their aspirations and be part of Canada’s thriving business community.”

The official announcement of the 2021 award winners was made on November 17th via live broadcast of the RBC Canadian Women Entrepreneur Awards gala. The gala, hosted by Marcia MacMillan, Anchor, CTV News Channel, was a live awards broadcast which transported guests from coast to coast where they met the Ones to Watch Recipients and Award Finalists in their hometowns and cities.

This year, a record-breaking 10,458 nominations were received recognizing women entrepreneurs from across the country. The 2021 award winners are:

HOW TO MAKE A MILLION IN REAL ESTATE By Cindy Wennerstrom-Wroblewski, Investor and Consultant  In my 22-plus years as a real estate investor, the million-dollar question has...
Read more