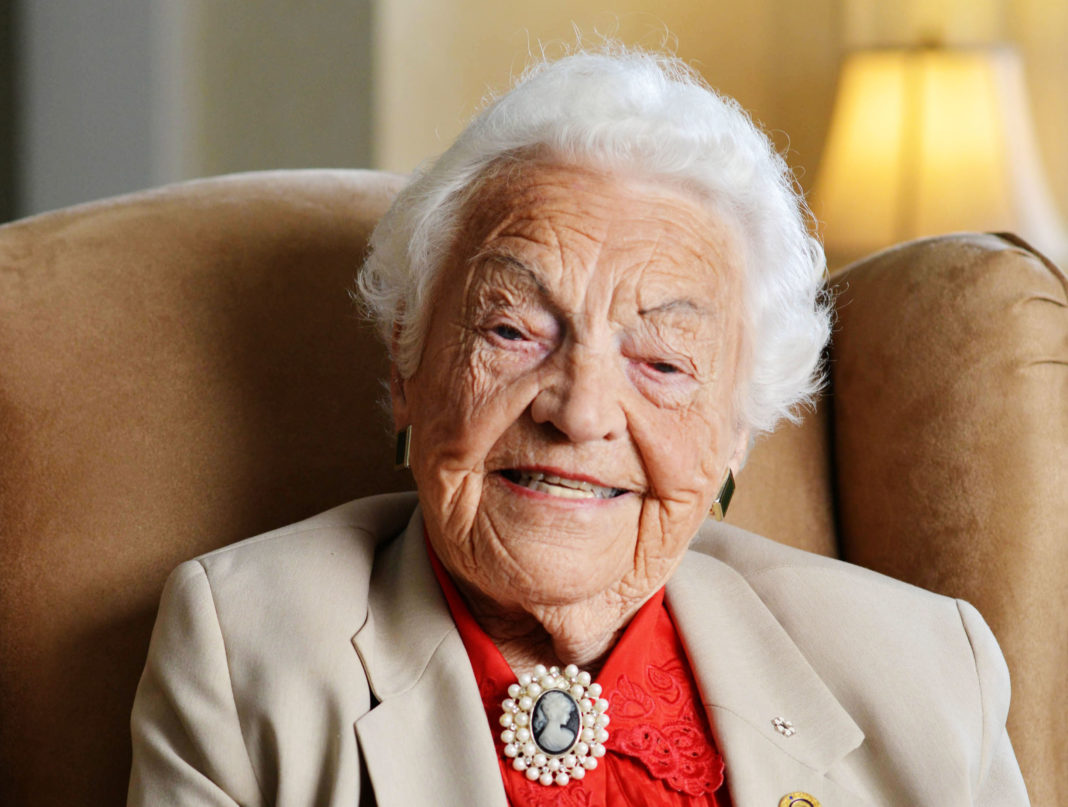 Leading in politics and business with Hurricane Hazel!

Hazel McCallion was mayor of  Mississauga for 36 years, from 1978 to 2014, the longest-serving mayor of a big Canadian city in the country’s history. Originally from the Gaspe Peninsula of Quebec, she began her business career in Montreal and then came to Toronto in 1942.  She first took office as mayor of Streetsville and then of Mississauga. McCallion is a political and business leader and an icon in her community, and known as a visionary and tough leader.

Age is just a number with Hazel McCallion. Could some of your best achievements come after you are 65 or 90 years? What dreams do you still desire to achieve in your life? What do you desire to be doing at 90 years of age and perhaps not retiring? You can still keep going.

These are things you just may want to think about, because your life can get better as you age, when you plan ahead and think positive. Let’s dispel the myth that elderly people always get sick and that things begin to go downhill after age 65. On the contrary, what if you plan ahead, decide to keep active and have a great life filled with meaning, people and purpose, and never completely retire while remaining healthy. How is it one woman can still be strong and working, managing multiple jobs, sitting on advisory councils to various boards, being healthy, single and on no medication at 98? Women’s Millionaire interviews Hazel McCallion on her life and secrets for success and maintaining health.

Women’s Millionaire: So what do you think the secrets of your success and longevity were over your career as mayor for 36 years?

Hazel McCallion: Hard work, dedication and commitment. Doing my homework on any decision that I made and also consulting with others. Always listening carefully to what others may be able to assist you with, listening to them, asking and solving. Being interested in meeting with people and listening to their comments on different things and finding out their concerns.

WM: Who would you say were the biggest influencers in your life and how did they influence you?

HM: Well my mother was a big influence on me and my eldest sister, Linda, and also a lot of other people along the way. You know it’s hard to say how many people had an influence on me, because if you’re interested in being with people and meeting with people, you get a lot of good ideas on what they have done and how they accomplished things. You can’t and don’t have all the answers to all the challenges in life. My dad inspired me the most to go into business. He inspired me to get my education then go back and help him with his business. However I didn’t go back.

WM: Who inspired you the most in politics?

Margaret Thatcher was a fantastic prime minister, but ahead of her time. She got defeated because she wanted to help the underdog. So I always interested and learning reading about her and what she was able to accomplish and how strong she was.

WM: What would you say are some of the best qualities for other women for getting ahead in in business and politics?

HM: Having confidence in themselves. Remain very independent, work hard and do your homework. You must also be extremely committed, because a woman has to work hard to get anywhere in both the business world and politics. You’ve got to work hard and sometimes you even have to work twice as hard because, as a woman you may also be looking after a house and raising a family. You gotta be confident in yourself and confident that you, as a woman, a female can do anything a man can do.

WM: And what would you say is the most important factor in keeping your health and body in good shape over the long term?

HM: Physical exercise is very important. I think you should also watch your diet. I still exercise and take my dog for a walk every morning. I get up and exercise and also have a bicycle in the house. I also still cycle and ride a bike outside. I don’t have time to sit around a lot. I always find something to do by keeping busy. Diet really plays a big role in health, which means lots eating lots of vegetables and good food including fish.  Also having a positive attitude in life and staying on top of your emotions and keeping happy. Don’t be afraid to make change, if you are unhappy in your job, move on.  You know, I like to be with people a lot, so I sort of just say it’s a combination of everything. It’s a combination of balance. You’ve got to make sure you balance your life.

And also I can say that you should plan every day. You should not get up in the morning without a plan. You know, every single day, make sure that it’s the best day of your life, because you never know if you’re going to be here tomorrow.  I plan every night before I go to bed as to what am I doing the following day. If you have a dog and have to look after it, like I do, you have to plan time for that too, as I live on my own with my German Shepherd. If you have a family you have to look after the kids, get them ready for school. So you know I raised all my children while I worked. So that’s what you call planning. And most of all, you just always have to think positive, never be negative.

WM: What advice would you give to other women who’d like to be successful in politics and business?

HM: You have to be strong. Strive to demonstrate your strength and confidence in yourself, as It permeates to other people. People in business can judge and know quite quickly if you are confident or not. You must also be a go-getter and always take action on what needs to get done.  It’s the little things you do that count.

You also have to be prepared in politics to accept criticism because a politician is the main objective of citizens to criticize, and to be able to deal with that. And you have to work hard, be responsible and take action on things that are brought to your attention. In other words, you can’t sit back and relax, be complacent and completely set aside things and hope they’ll go away. You’ve got to take action on issues and solve them. You don’t sit around hoping that somebody will forget they called you or forget they sent you a letter, forget it. You’ve got to take action on their comments and address their requests and complaints.

WM: What changes and improvements would you like to see in politics for Canada in the future?

HM: Well I think the political parties have to be working more closely together and not always be complaining about one another. It seems to be that no matter how good the legislation is, they gotta pull it apart and complain about it. I think it’s got to be a genuine desire that they are there for the people, and also that they will work together, to make sure that whatever legislation is implemented, that it is good for the benefit of everyone.  It may

not be good for everybody but good for certainly the majority of people. Also to spend the public money efficiently with very little waste. That’s what people are looking for. They should have more effective and efficient ways of spending taxpayers’ dollars.

The municipal leaders should also be given authority. Currently the municipal leaders have much less power compared to the provincial governments. We’re gradually getting more authority but we still have a long way to go. For example, we as a municipality must balance our books, but in the federal and provincial governments they don’t. We should have more authority in regard to making decisions towards the financing of our municipality. We are all subject to provincial approval of our election regulations. As mayors I think we’ve grown up and should be given more leverage, as we also know the issues and requirements for people of the city.

WM: As the mayor of Mississauga, what did you do to further develop Sheridan College?

HM: I’m now the Chancellor of Sheridan College, but while I was mayor we were able to work to bring Sheridan College back to this city.  We provided the land for them to build the college in the city core.

WM: While you were mayor, about how many development projects did you facilitate?

WM: For the future of Mississauga, what projects and buildings would you like to see developed?

HM: We need a large convention center in the city core and also a major five-star hotel facility than can handle three or four thousand delegates. Additionally we have a small museum but I would like to see a major museum displaying the whole history of Mississauga in addition to a good size major art gallery.

WM: As mayor what would you say was your most difficult challenge and how did you overcome it?

HM: The derailment in 1979 was the worst challenge I faced. We put together a team of local organizations including the fire, police officers and communication programs. It was a huge collective effort and the support of everybody working together creating a team effort that helped us overcome the challenge. We evacuated 230,000 people. It was the largest evacuation in North America at the time.

Additionally, developing the city from 270,000 people and growing it to a city of close to 800,000 was quite a challenge. It was not easy! We became the sixth largest city in Canada in a short period of time.

WM: What are you doing now with your career?

HM: Having retired as the mayor for the city of Mississauga at 93 years, I became the Chief Elder Officer for Revera, Senior Long Term Care and often visit senior homes, speaking and inspiring others to keep active. I’m also the Chancellor of Sheridan College and adviser to the vice president of the University of Toronto, Mississauga Campus, Honourary Guardian for the Trillium Health System and also advisory to the Ontario Women’s Hockey Association.

WM: What in your legacy do you hope to be remembered for the most?

HM: For developing a great city, with a dynamic team, that people enjoy living and and working in. We’ve also done a great job in developing our beautiful waterfront in Port Credit.

Hazel still lives with her German Shepherd dog Missy, who is now 13 years old and also still going strong just like her master. Isle of Avalon, A Land of Myth and Magic – Glastonbury...

HOW TO DETOX FOR WEIGHT LOSS: HEALTHY EATING HABITS AND...

Isle of Avalon, A Land of Myth and Magic – Glastonbury...

HOW TO DETOX FOR WEIGHT LOSS: HEALTHY EATING HABITS AND...